How to Grow Cilantro Indoors 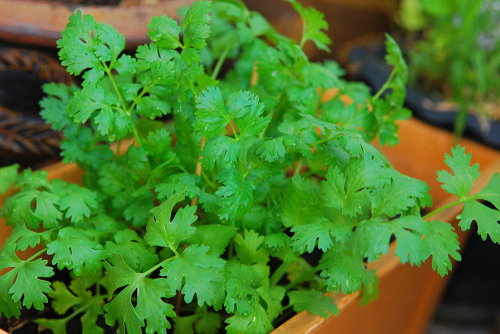 Your Ultimate Guide on How to Grow Cilantro Indoors

To say cilantro has been around for a long time is an understatement. Cilantro seeds discovered in a cave in Nahal Hemar Israel, were dated as being 8,000 years old.

An amazing, self- seeding grower, the cilantro plant grows well in a variety of conditions, including indoors in pots. This makes it a perfect inclusion to your indoor herb garden, even if you are new to indoor gardening.

If you know about cilantro, you’ll know what a delicious addition it makes to all kinds of cooking and dishes.I love to include it in rice dishes, mix it with lime juice as a salad dressing and as a garnish for stir fries.

No matter how you use cilantro in your kitchen, there is something very special about the smell of fresh herbs like cilantro, as you cut them from their pot and add their deliciousness to your cooking.

In this guide, I’ll show you how to grow cilantro indoors so you too can enjoy the magic of this wonderful herb. You’ll even discover the amazing health benefits of cilantro as well as my easy but delicious guacamole recipe.

Being a short –lived annual, you will usually have about 8-10 weeks to harvest cilantro indoors.

It’s a good idea to plant new seeds every three to four weeks to ensure a constant supply of fresh leaves through- out the growing season.

The cilantro plant grows from a single tap root and doesn’t like being disturbed or transplanted.

Growing cilantro in with other herbs isn’t usually a problem, as it gets on nicely with most herbs, with the possible exception being fennel.

A great way to get your indoor herb garden started is with an indoor starter kit with grow light.

For the best results, place your potted cilantro in bright sunlight for 5 to 8 hours, or use artificial grow lights.

Being indoors, your cilantro will generally be safe from conditions that can harm it, such as heavy frosts and high heat and humidity.

Like most herbs, its main growing period is during the warmer months.

During winter, try to keep your plant as warm as possible by avoiding draughts and direct contact with window sills.

Always keep the soil moist but not consistently wet. Little and often is probably the best way to water cilantro indoors.

Too much water can result in root rot which has a tendency to be terminal for plants such as herbs.

Overwatering is the number one killer of indoor plants generally.

During the hottest months, use your finger to test the moisture level of the soil. If the first inch of soil is dry, then the plant will need watering.

Like many herbs grown indoors, cilantro does best in loose, well-draining soil.

Cilantro is really quite a low maintenance plant, with little need for fertilizer, except perhaps during the warmer growth months.

During periods of high growth, use an organic, liquid vegetable fertilizer, every 3- 4 weeks. Avoid over feeding mint as the tips can turn dark, signaling burning roots.

Seaweed based feeds are also ideal as they are rich in nutrients.

As with basil and mint, try to avoid fertilizers rich in phosphorous (P) or potassium (K). These fertilizers encourage flower growth which competes with leaf growth.

This is fine if you are after coriander seeds but no good if wish to harvest fresh cilantro leaves.

How to Harvest Cilantro Indoors

Make sure that you harvest your cilantro before the leaves turn feathery and the plant starts to flower.

Cilantro has a tendency to grow like crazy over summer and then go to seed.

Unfortunately, once cilantro starts to flower, its leaves become bitter and less palatable.

Remember that like many herbs such as basil and mint, cilantro is best consumed fresh, as its flavor is lost when drying.

If storage is necessary, then freezing cilantro in air-tight bags is probably the best way to go. 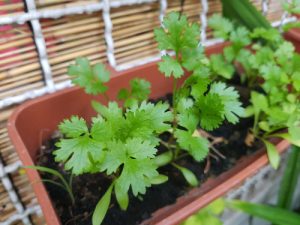 Use a deep pot to allow room for its long tap root.

It can usually take between seven to twenty days for the seeds to germinate.

If you are growing cilantro for the seeds rather than the leaves, then it’s best to place the plants about 4’’ (10 cm) apart and place them in a sunny position.

Seeds usually appear about 90 days after sowing. Collect the seeds by cutting the plant and hanging it until dry.

Then shake the plant, collecting fallen seeds into a paper bag and then rub the dried plant to extract any remaining seeds.

Store the seeds in an airtight container and use whole, or grind them with a mortar and pestle to create a powder. 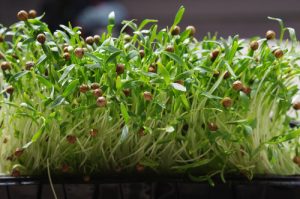 It’s important to select a pot that’s at least 8 inches in diameter, at least as deep, if not deeper, and has drainage holes at the base.

Plant in a high quality, well-draining soil based mix.

Coriandrum sativum is by far the most popular cilantro variety grown as a cultivar known as ‘Leafy Leisure”. It’s selected for its quantity of leaves and the fact that it’s slower to bolt than regular cilantro.

It’s fun to experiment with other different cilantro cultivars such one with a hint of lemon flavor to its leaves.

Cilantro is packed full of vitamins, minerals, anti-oxidants and phytochemicals. This means that not only does it taste great, it’s a health food as well.

Cilantro contains high levels of vitamins A, K, C and E.  By eating ½ a cup of cilantro a day, you would be receiving 16% of your daily recommended amount of vitamin K [a vitamin group important for functions such as blood clotting, bone metabolism and regulation of blood calcium levels].

It’s also a supplier of essential minerals such as iron, potassium, calcium and magnesium as well as being a source of dietary fiber.Cilantro is widely consumed across many European countries where people believe it to lower blood pressure, bad cholesterol levels and heart disease.

This in turn reduces the levels of toxicity in the colon which helps reduce the risk of colon cancer. See http://www.ncbi.nlm.nih.gov/pubmed/10940583

Other cilantro health benefits include;

Apart from its many health benefits, being high in anti -oxidants such as vitamin A and C, cilantro has a number of benefits as a beauty aid.

Cilantro is a strong antiseptic with anti-fungal, anti-inflammatory and anti-bacterial qualities.

This means that it can serve to clean and disinfect, as it cools and soothes your skin.

Cilantro is quite a hardy plant and generally quite hard to kill. When grown indoors, cilantro is unlikely to be affected too badly by pest or disease.

Here are some of the most common cilantro growing issues;

Solution: Seek out “bolt reducing” cultivars from your nursery

Cause: aphids, fungus gnats or whiteflies

Solution: Shower the plant to remove the insects or use insecticidal soap

Cause: Not enough water

Solution: Keep up your watering, especially in summer

Cause: Lack of full sun

Solution: Move your cilantro plant to a sunnier spot or use a small grow light. 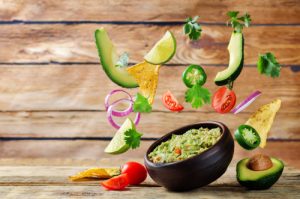 Every cook has their own favorite version of guacamole.

This is mine and I love to serve it with freshly made tortilla (or toasted triangles of pita bread works just fine too!)

If you want to get more fancy with guacamole, you can use it as a garnish for a crab salad or a filling for a hollowed out baked potato to accompany grilled chicken.

Note: I don’t use tomatoes but many cooks do!

Juice of 2 limes or 1 lemon

Toss avocado in with lime juice

Serve immediately or as soon as possible

How to Grow Herbs Indoors – The Series

A Complete Guide to Growing Lemongrass Indoors  Lemongrass (Cymbopogon citratus) is an aromatic, perennial grass with… 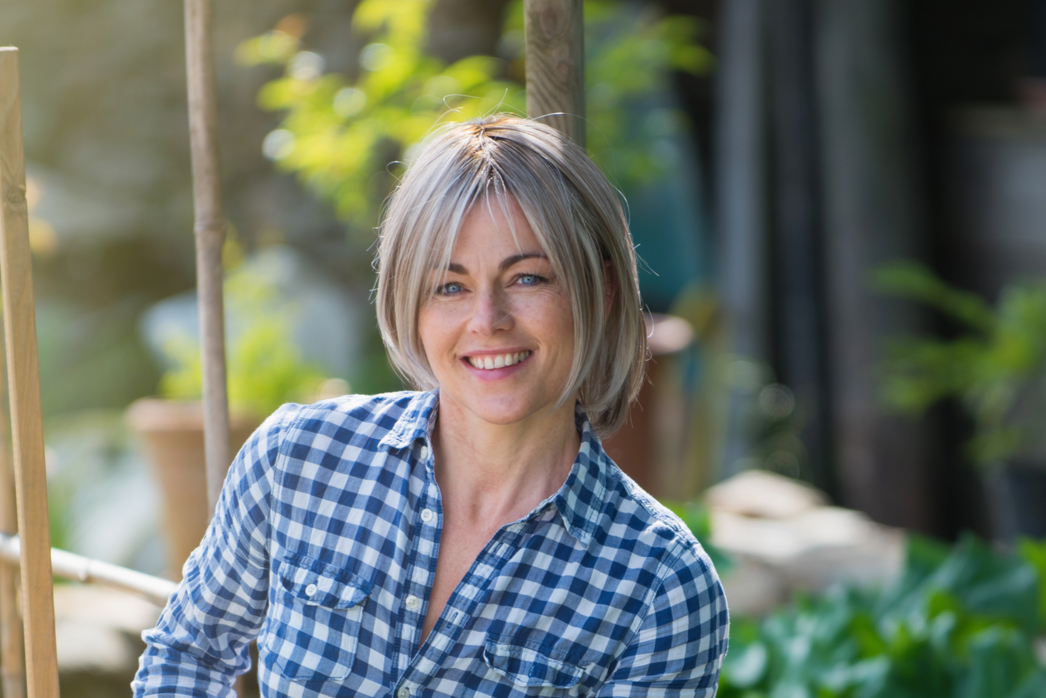